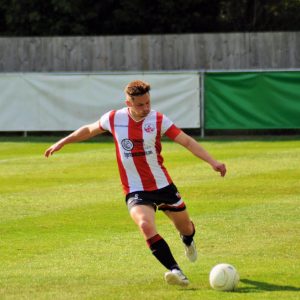 The 21 year old centre-back had this to say upon penning his contract:

“I’ve had two great seasons at Sheppey United where we have gained promotion and played in two cup finals. I’ve learnt a lot from Ernie, Barry and especially Geoff since being here, and feel like I’ve improved during that time.”

“I have loved playing in front of the 300 plus fans that turn up every week, which is unheard of at this level, and is the main reason I’ve signed on for another year.”

“Ernie and Matt have also showed their intentions for next year by getting in some very good Ryman players, making it an obvious choice to stay on. I can’t wait for the season to start, and hopefully we can push for another promotion and cup final.”