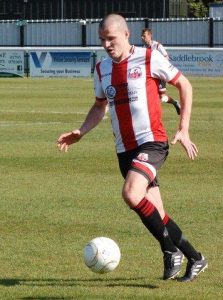 The Club can confirm that the following players have left Sheppey this summer: Richard Atkins, Arlie Desanges, David Abe and as previously announced – Danny Walder.

Richard Atkins represented the club 29 times last season and scored 13 goals. Due to work and moving home, Richard can no longer commit to Sheppey.

Arlie Desanges joined us from Sutton Athletic during last season scoring 3 goals in 10 appearances for the club but moves on this year.

David Abe also turned out for the Ite’s 10 times last season whilst on dual registration with Sittingbourne and will now be playing for Lordswood this coming season.

Danny Walder made 14 appearances last season but will now be challenging for promotion with Faversham Town in the Bostik South League.

We thank all our departing players for their efforts during their time at Sheppey United, and wish them every success in the future.